Crime of the Week

If you have any information about these crimes or any person(s) involved, you are urged to call Crime Stoppers at or submit a Web Tip .  You do not have to give your name.  CRIME STOPPERS will pay a cash reward of up to $1000 and you can remain anonymous.

In October of 2018 The Terrell Police Department met with a victim regarding credit/ debit card abuse. The victim said her purse was stolen in Mesquite, Texas and her credit cards  were being used in several cities including Terrell. Video surveillance shows the suspect is a black male of thin build with a salt/ pepper beard and was wearing a blue camouflaged Cowboy's hat, grey t shirt, grey sweat pants and had glasses hung along the neck of his shirt. The male suspect was joined by a black female with curly blonde highlights, earrings and a green shirt and black pants. The suspects were in a newer model silver Nissan Sentra handicap placard hanging from the rear view mirror. 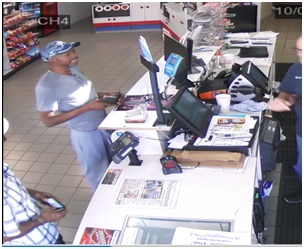 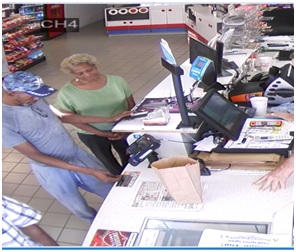 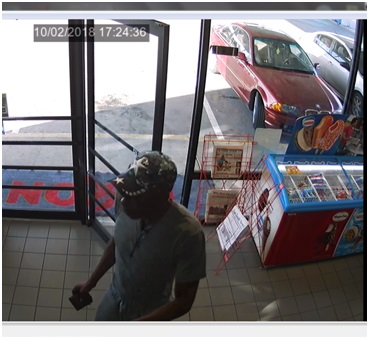 On December 29, 2018 at approximately 1330 hours, two females, pictured below, entered the Old Navy store at Tanger Mall. The females each grabbed a mesh bag that is provided to customers and began walking around the business placing clothing items inside the bags. The females then exited the business past the last point of payment without attempting to pay for the merchandise. The female entered an older model 4-door maroon passenger car and fled the scene. The total amount of theft is estimated at $1181.73. 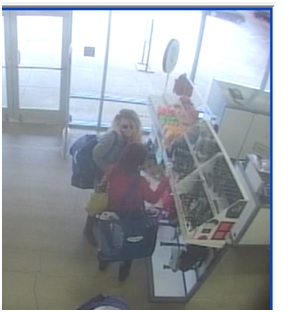 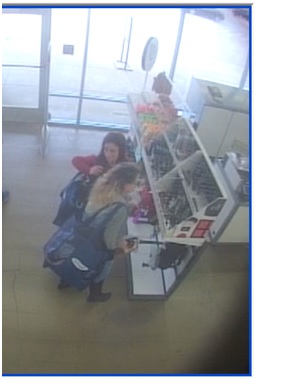 On Wednesday November 7, 2018 the Terrell Police Department responded to a burglary at the Cornerstone Baptist Church located at 113 State Highway 205, Terrell, Texas. Several items were missing including electronics, speakers, band instruments and credit cards with a value of $11,000.00. The credit cards were used at a Walmart in Seagoville, Texas. The video surveillance  show a white male and white female using the card. 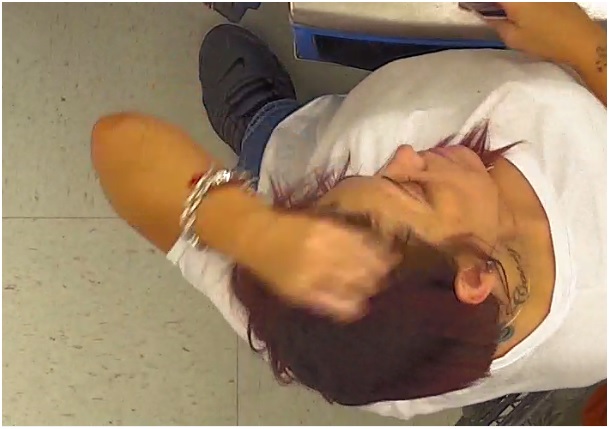 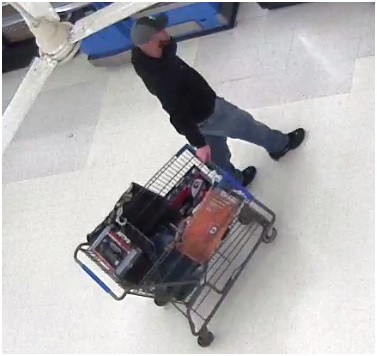 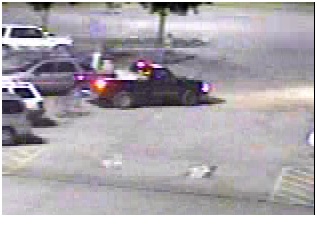 On Saturday, November 10, 2018 Officers were dispatched to Walmart  in reference to a theft where suspects fled the scene.
The bellow pictured suspects ran out the back door exit with a TV (SAMSUNG55TV) valued at $899.00, and two computers (23.8 FHD/I5 and HP AIO) valued at $399.00 and $398.00. A white GMC Yukon was waiting for the suspects and fled from the location when the suspects were confronted by employees leaving the suspects behind. The suspects abandoned the property and fled the location on foot. 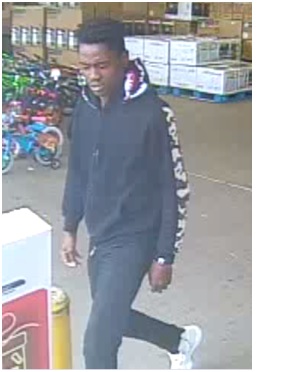 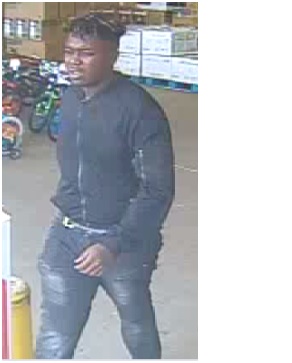 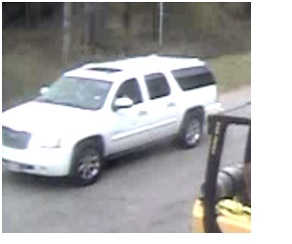 On Wednesday September 19, 2018 at approximately 1513 hours, The Terrell Police Department was dispatched to 1900 W. Moore Ave. (Walmart) in reference to counterfeit money.
The  female pictured below entered the store and paid for items three different times using counterfeit twenty dollar bills at each transaction.

The below pictured suspects used the victim's credit card at multiple locations within the city of Terrell. Contact Crimestoppers or the Terrell Police Department with any information. 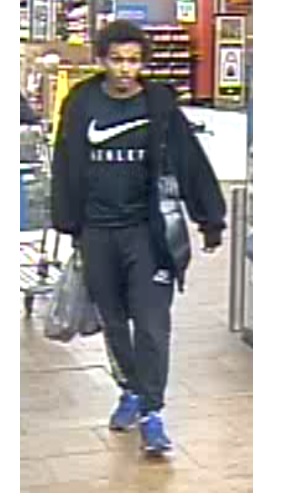 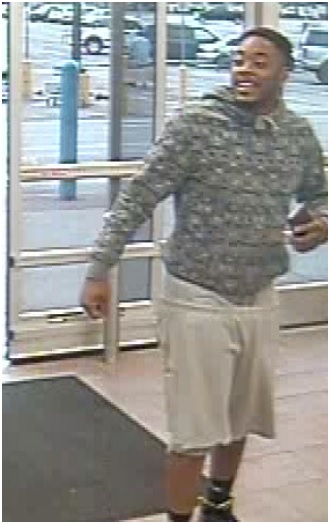 On Thursday 09/27/2018 The Terrell Police Department was dispatched to a forgery passing of a check that occurred at the Walmart American National Bank located at 1900 W. Moore Ave. The suspect pictured below passed the forged check for the amount of $3,500. 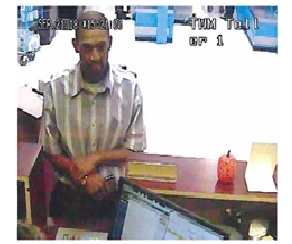 The couple in the photo are unidentified and are suspects in two thefts at Home Depot in Terrell.  The police need help identifying these two subjects.  You may report though Crime Stoppers for a possible reward if information leads to an arrest or you may call Criminal Investigations at 469-474-2639 if no reward is wanted.  Thank you.

The bellowed pictured subjects are suspected of passing counterfeit currency on multiple occasions at Wal-mart, located in the City of Terrell. 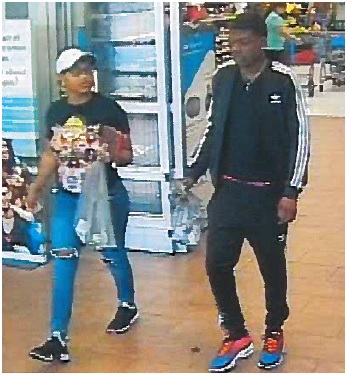 On Sunday, September 16, 2018  Terrell Police Department Officers were dispatched to 1900 W. Moore Avenue (Walmart) in reference to a theft

Upon arrival, Officers made contact with Walmart loss prevention employee, Teresa Morrow. Morrow advised she was reviewing video and observed two white males enter the rear parking lot from the wooded area behind the business. The two males walked to the front of the business and met with a white female in a red Chevrolet Tahoe. The female had previously been inside the business and purchased an item. The males entered the vehicle with the female and after a few minutes exited the vehicle and entered the business. Upon entering the business the males placed several items totaling $573.00 into a shopping cart and exited the business through the emergency fire exit without paying for the items. The subjects entered a silver passenger car that did not have a license plate and fled the scene. 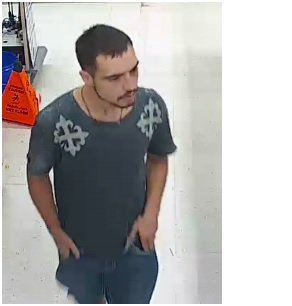 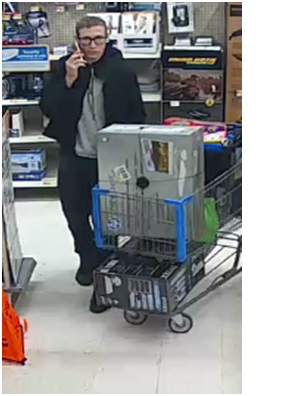 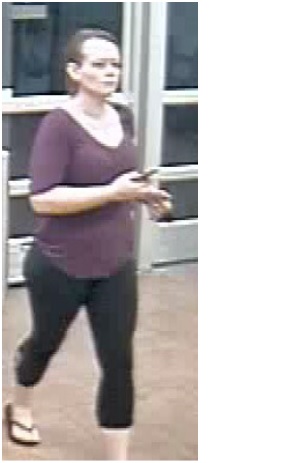 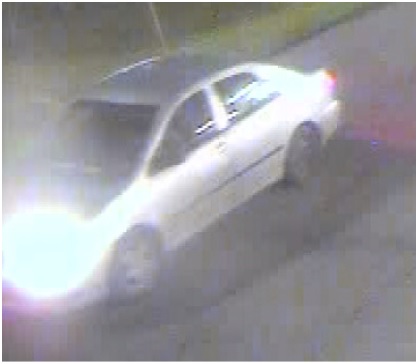 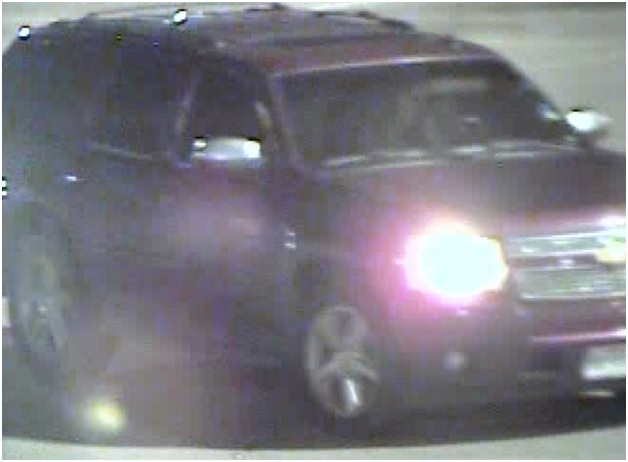 On 08/06/2018, Officers were dispatched to Holiday Inn located at 300 Tanger in reference to a theft. The victim was sitting outside of the hotel lobby on a bench when a black male sat next to her. The victim got up for a brief moment and the black male suspect reached into the victim's purse and took a small coin purse that contained her Debit Card.

When the victim noticed that her card was missing she immediately called the bank and had the card canceled, but not before the suspect had made a transaction for $14.59, at Circle K Corner Store (Valero) located at 1703 S. SH34.

Below is a still photo of the suspect using the card at Circle K (Valero). Video showed that the suspect arrived in a light colored Chevy Impala. 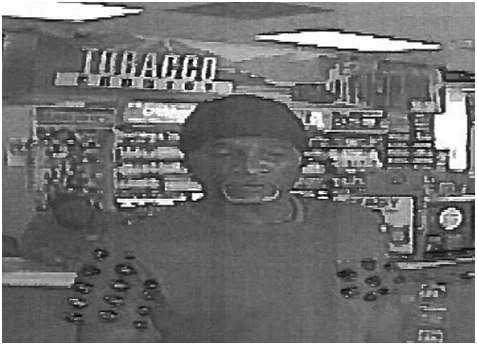 The gray or silver car in the photo was used to drop off a suspect in the 1400 block of E. Moore in Terrell, in order to steal a truck and trailer full of lawn equipment valued over $30,000.  It appears to be an older model Toyota Camry or simular Sedan.  The truck and trailer were recovered after the truck caught fire.  If you have any information about the suspect, please submit a tip.

STATUS: OPEN
The subject in this photo used a fraudulent debit card at a local business in Terrell.  He fled when the clerk advised him that the transaction showed the card to be fraudulent.  If you recognize this subject, please forward a tip. 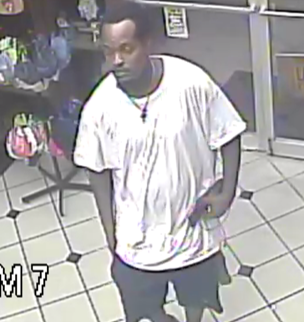 On Saturday, 08/11/2018 a white male wearing a light colored short sleeve button down shirt and blue jeans entered the garden center at Walmart in the city of Terrell and removed a Monster Moto 1000 Electric Mini Bike. The male attempted to load the mini bike into the trunk of his vehicle and was confronted by an employee. The male left the mini bike and fled in the vehicle, described as a newer model maroon Chevy 4-door passenger car. 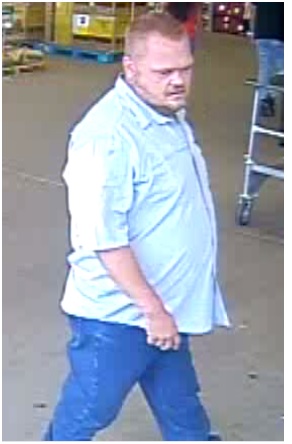 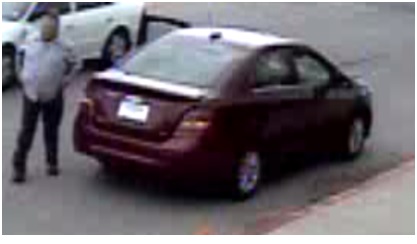 On August 5, 2018 the two subjects in the photo exited Terrell Wal-Mart with a buggy of merchandise that had not been purchased.  They decided to leave the buggy and items in the parking lot and flee in the black Chevy Colorado.  The male appears to have light colored hair with possibly some reddish tent and facial hair.  He possibly has sleeve tattoos on both arms and a chest tattoo.  The female appears to have brown hair and a chest tattoo near her right shoulder and a star tattoo on her right calf. 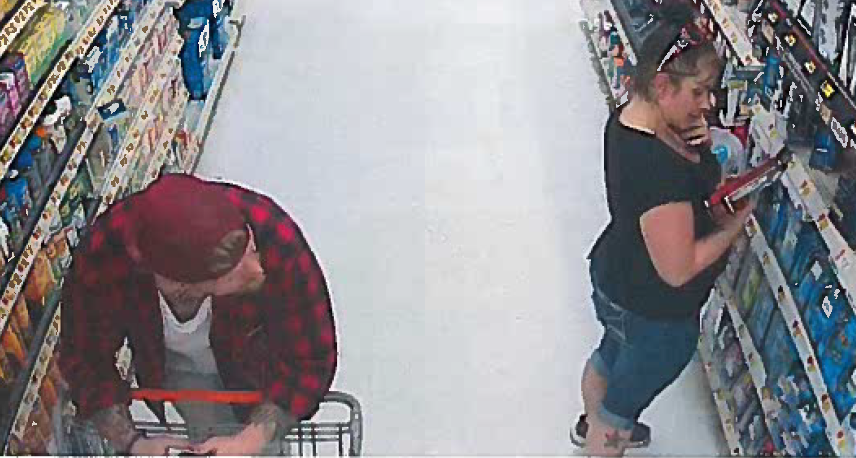 On June 26, 2018, while at Wal-Mart in Terrell, TX , the subject in the attached photo attempted to pass a forged check and was in possession of identifying information belonging to another.  When the subject was confronted, he quickly exited the business.  Terrell Police need your help in identifying this subject. 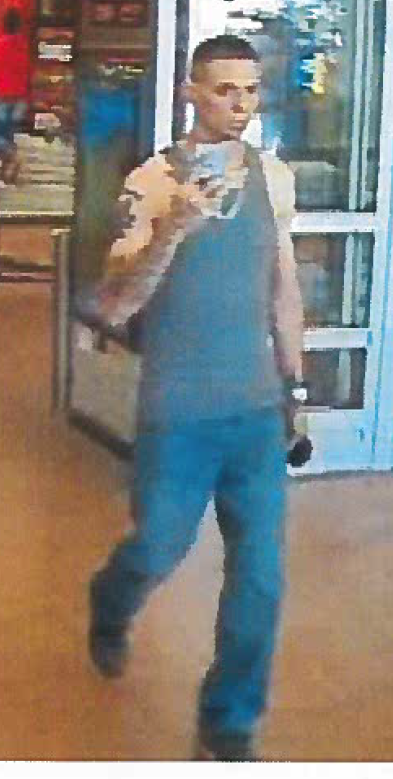 Two white male subjects traveling in a Blue Chevy Cruz, possibly with a German Shepherd dog, are believed to be the suspects in two vehicle burglaries in Terrell.  The subjects punched out the keyholes on the driver's side doors of two 2008 model Ford F-150 trucks.  One location was at Buccee's and the other was at the Two-Aces restaurant.  Both occurred the same day and possibly within 15 minutes of each other.  There appeared to be no front license plate and the year model is unknown.

The Terrell Police are seeking help with identifying a subect suspected of Robbery.  On Sunday June, 17, 2018 at approximatley 11 pm, a 19 year-old white male subject was walking south-bound in the 100 block of Hwy148, near the Rail-Road Track, when he was attacked by a black male wearing a red shirt with white lettering and tan shorts.  The suspect has a tattoo of numbers on his right tricep (the back side muscle of the upper arm).  He may be between 5.09 and 6.00 feet in height and appromately mid to late 20's in age.  The suspect took property from the victim.

The Forney Police Department is seeking the public’s help with any information regarding a recent theft from the AT&T store located at 780 E. US Hwy 80, Suite 200, in Forney, Texas. Photos and a video of the subject are included as well as provided information so far;

On 8/22/17 At 4:27 pm, subject pictured took item(s) and fled from the store. Subject was last seen heading west in the parking lot towards Cowboy Chicken.

Anyone with information regarding this incident is encouraged to contact the Criminal Investigations Department at the Forney Police Department at 972-564-7607. You can also leave information anonymously at Kaufman County Crime Stoppers, 1-877-847-7522. If the information leads to an arrest, a reward could be granted to the caller. 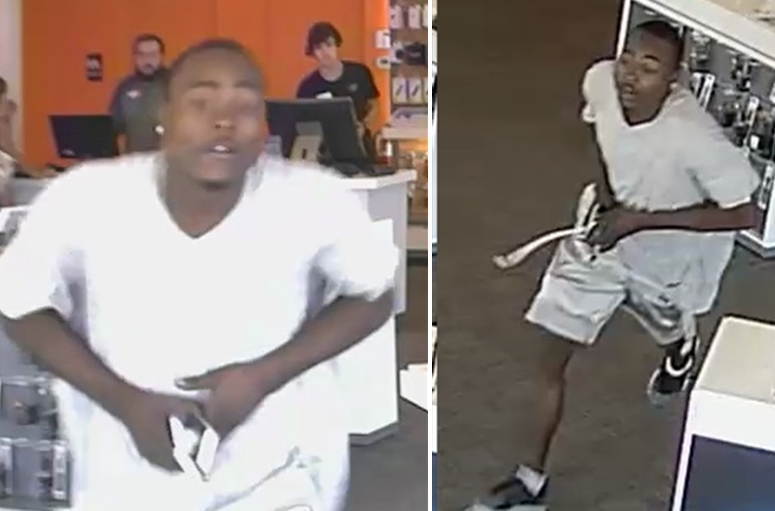 The Forney Police Department is seeking the public’s help with any information regarding recent TV thefts from Walmart located at 802 E. US Hwy 80 in Forney, Texas. Photos of the subject are included as well as provided information so far;

On 8/21/17 At 9:55pm, subject pictured took a Samsung 55" Curve TV. Subject had parked a black Chevy Equinox outside the building near an exit door.

Anyone with information regarding this incident is encouraged to contact the Criminal Investigations Department at the Forney Police Department at 972-564-7607. You can also leave information anonymously at Kaufman County Crime Stoppers, 1-877-847-7522. If the information leads to an arrest, a reward could granted to the caller. 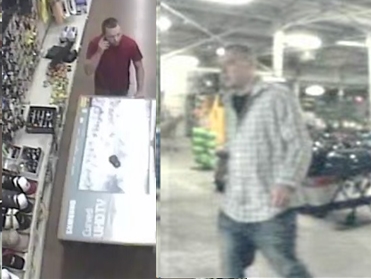